Five years ago, on the night of May 4, 2007, an EF5 tornado nearly two miles wide ravaged the town of Greensburg, Kansas, resulting in a tragic loss of life, displacing more than 1,500 people and destroying 95 percent of the town’s homes and businesses.

At the State’s request, BNIM became an early contributor to the town’s initial recovery efforts, working with community members and town officials as well as local, state and federal organizations like the Federal Emergency Management Agency.

Over the next four years, BNIM-ers worked tirelessly with the town on many projects: the first phase of the sustainable comprehensive master plan to rebuild the city, which provides a framework for the rebuilding of Greensburg based around the principles of economic, social and environmental sustainability; the streetscape design; the LEED Platinum K-12 School; the LEED Platinum City Hall; and consulting on the SunChips Business Incubator and the BTI John Deere Dealership. 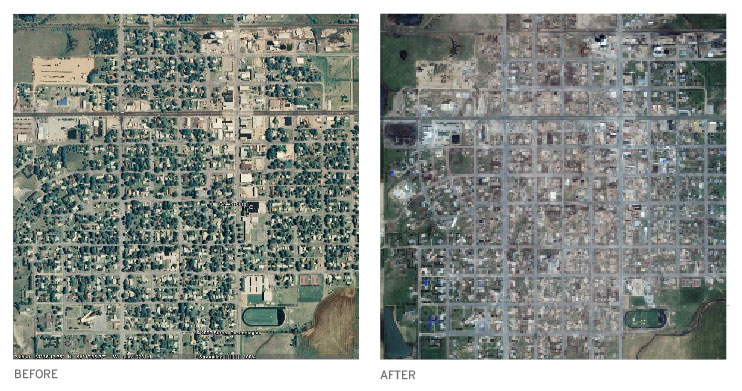 Greensburg Before and After the Tornado

Project teams logged countless hours making the five-hour drive west. It was hard to know then what an impact this town would have on each person, the firm’s projects and the way that BNIM engages communities that are defining their future, but now, five years later, the impact is clear. Everyone has their own story to tell of how Greensburg enriched their lives, their careers and helped to shape both them as individuals and BNIM as a firm. We asked some of the people who worked in Greensburg, or who have come to work in communities touched by disaster since Greensburg, to share their thoughts about how Greensburg has shaped both BNIM and their personal experiences.

This is what they said.

“Greensburg is best known for being the gritty little city that chose to ignore the New York Times editorial staff's advice to accept the EF5 tornado as a signal from nature to leave their "dying town" and move to one of the adjacent dying towns, possibly improving their collective chance of surviving as a rural American town. If that weren't enough, they also chose to become the first city in America to make LEED Platinum their standard for rebuilding, and later receive well-earned praise from FEMA and two presidents for becoming the global model for rebuilding after a disaster.

They deserve enormous credit for all that and more. When Governor Sebelius called to ask if "[BNIM] would help rebuild Greensburg green," I knew from nearly 15 years experience in working with communities in post-disaster planning that the trend is to build back exactly what was lost at the earliest possible moment. I also knew we would need to engage the community in a dialogue that would inform their plans for rebuilding and I assumed that they might not be inclined to embrace green as a goal.

But I didn't know that these conservative, inspiring Kansans would change our practice. We always work to engage the community in a conversation about their future. By facilitating this dialogue of discovery, we learn about their culture, values and fears — and they establish some clarity about their vision for the future and set specific goals for rebuilding. This often takes place in a gymnasium or large community space to accommodate all the stakeholders that wish to participate; usually the participants include city officials, civic and business leaders, educators, religious leaders and community activists, and a curmudgeon or two. In Greensburg no building survived that would accommodate such a meeting and there were no residents because there were no homes. FEMA erected circus tents and the community was invited back to Greensburg for a meal and community gathering to celebrate the lives of those who were lost, to reconnect as a community and to explore their future.

Everyone came, including the women and children. Prior to Greensburg these conversations were, for the most part, between white middle class males. These diverse and insightful voices in the Greensburg visioning process changed the nature of the conversation, the vision and goals the community embraced, and the community they have built! If not for the outspoken input of the youth, the school would be an ordinary regional school located 10 miles from town on a site the school board purchased within a week of the storm. But because the next generation saw a need for change and had the desire to stand up for it, the school is now an anchor for the community sited along Main Street, both transforming education and adding vitality to the community. The folks in Greensburg, KS changed our thinking, our approach, our practice and hopefully our service to other communities that we have served in the five years since the Greensburg tornado.”

“Working with the School District to create a new school – one that focused first on providing the best learning environments for all students – was at once inspirational and humbling. Their ability to work through the tragedy and use this pivotal moment to re-envision their school as a catalyst for community development and sustainable pedagogy was remarkable. They persisted with extraordinary consistency to reach the target despite constant challenges. No hurdle was too big and each was met with the same determined spirit and optimism. I take great pride knowing the school is allowing Greensburg – and Kiowa County – to be recognized as leaders in both education and sustainable design.”

"As a Kansas kid, I grew up learning about the founding of the state and listening to the stories of my relatives who immigrated to small Kansas communities. But it wasn’t until 5 years ago this May that I was able to see first hand what the state motto “Ad astra per aspera” (to the stars through difficulties), truly means. The tears, love, ambition and hard work that it takes to come back from devastation are difficult enough to harness, but to reach for the stars in that circumstance is a lesson I will always admire."

“During my first trip to Greensburg, I never imagined the impact the town and its people would have on my life. Up until that time, my understanding of design was based primarily upon ideas,process and execution. As I became more involved in the design of the school, the people and the being of the town of Greensburg became more a part of me in so many ways… this was manifested in the meeting of new friends, and partaking in casual conversations and stories of life, invitations into the homes of local families, and so much more. It is still hard to put the experience into words. Greensburg taught me a lot about the human spirit and just how powerful the notion of our “will” can be. This place made me want to know design because of the people that each building serves, rather than simply because of a design process.”

“Over the past five years, I’ve had the opportunity to tell the Greensburg story a number of times. It is either in a more generalpresentation about our work, or in a specific case of working with another community that has just experienced a similar disaster and is working through their own recovery process. In every case, even though I’ve presented Greensburg stories dozens of times, I am struck by the resilience of this community and struggle to hold back tears … tears that acknowledge the loss that night, and tears of respect for what they have accomplished. It is awesome to see how they embraced the new while holding tightly to their values. We often share the two New York Times articles: the first of which suggests the May 4 tornado might have done Greensburg a favor, and the second of which reports on its unqualified rebirth, and in such a brilliantfashion. What a story. Recently, we had the privilege to work with the Tuscaloosa community after their devastating tornado, it was so exciting to hear some folks talk about their recent trip to Greensburg … and how that experience encouraged them to think differently about how they could rebuild their schools and other public amenities in a way that was more vibrant and future-focused than before. Greensburg really has become a model for the nation.”

“Greensburg symbolizes what a community is capable of when faced with a choice to surrender and dissolve or to rebuild with a united set of ideals that are focused on more resourceful and healthier learning, working, and living environments. Architects are not necessarily out-front leaders of this exercise, but rather facilitators of an environment to provide an optimal collaborative, community-driven process aimed at providing a sustainable future – one that is ultimately defined, integrated, and implemented by the community members themselves, socially and practically.”

“The City of Greensburg, KS set the right tone for their rebuilding effort from the outset by establishing the highest building and performance standards of any city in the United States. I can say firsthand what an inspiration this was for our project teams, who worked tirelessly every step of the way to live up to these incredible standards. Although it was often challenging, the process was truly a partnership — there was a sense that success could only be achieved through our full collaboration. Specifically, I am grateful for the opportunity to have helped nurture the City Hall from start to finish. While it isn’t perfect, it is most certainly a small miracle given the hardships faced to realize it. It is a project with spirit and a great story to tell, literally built from remnants of the once devastated community. It is a testament to the will of the community and its leaders that they gather in a facility that represents not only their triumph and perseverance, but also a nifty 65% annual energy savings over the status quo.”