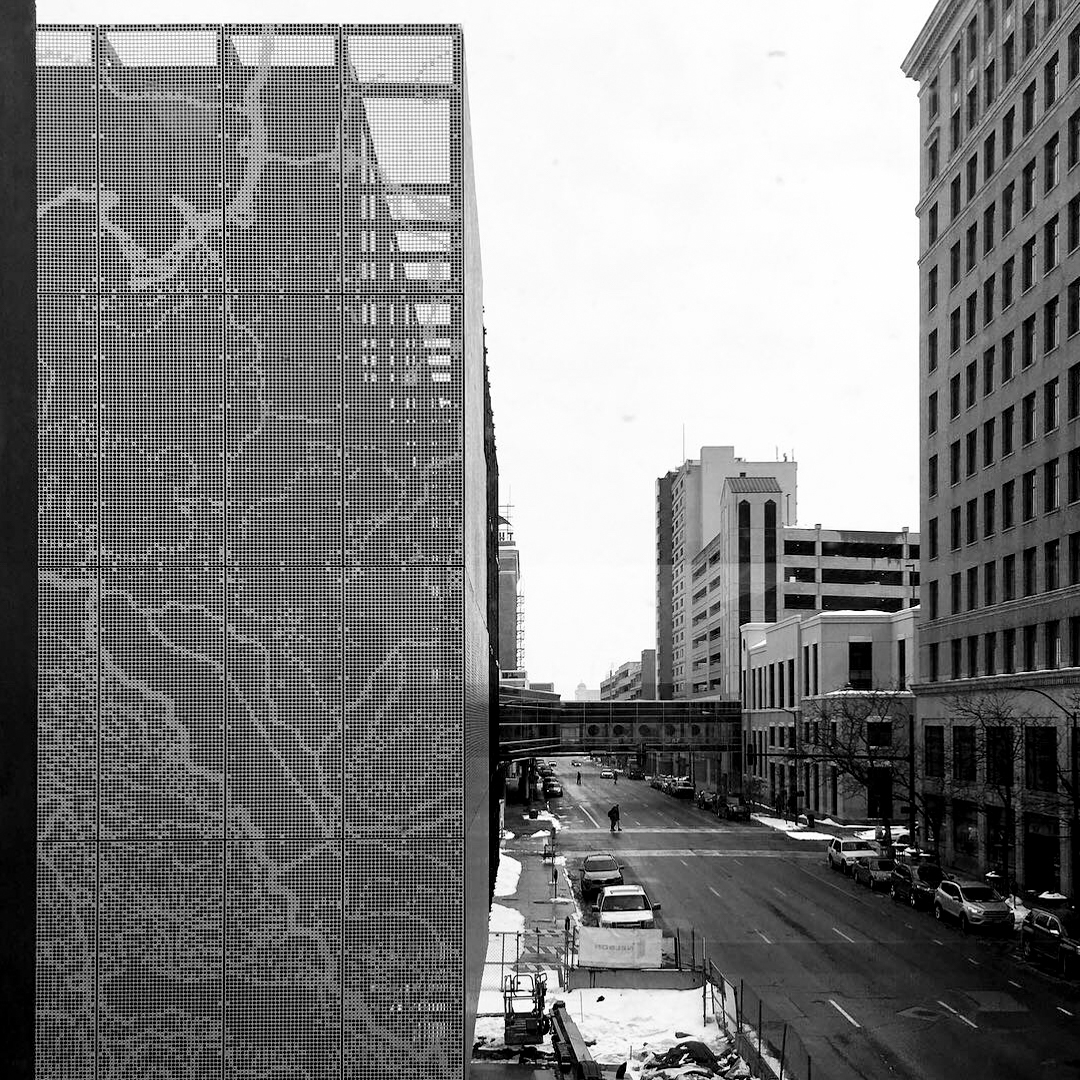 Des Moines is a special place with a rich history and identity. In regard to the architectural moments that shape this unique city, the Miesblock project establishes a conversation with the adjacent Catholic Pastoral Center building designed by Mies van der Rohe Architects, which was constructed 1962 as the Home Federal Savings and Loan building and renovated in 2018. Nelson Development, owner and developer of Miesblock, along with the design team, felt strongly about a responsive approach to this important adjacent architecture and saw the project’s potential to enrich the experience of the block for Des Moines residents.

Mies van der Rohe was a German-American architect and seminal figure in the modernist movement, as well as a director of the Bauhaus school of design in Germany, which significantly influenced the education and practice of design in the 20th century. Mies is known for creating architecture that celebrates the materials and fabrication methods available during the early-mid twentieth century. His approach to design sought efficiencies in design and fabrication that could be replicated in building practice throughout the world.

Miesblock plays off of Mies van der Rohe's approach by employing efficient fabrication methodologies and introducing modern materials that create a dialogue with the adjacent Mies building plaza. The result is an efficiently designed building responsive in pattern and scale to its context. A perforated metal veil unifies the upper floors of Miesblock. This scrim element is supported within the reveal of the precast and glazing module of the envelope by an aluminum framework, which holds it 40” from the face of the building. The scrim provides solar control, biophilic light quality, and identity to the building. The organic figuring that skates across the rigid module is intentionally abstract – is it the grain of rosewood, the veining of marble, topography of mountains and streams? Though it is, in fact, derived from a single hand-drawn river and mountain map of Germany circa 1893. This concept and design of the scrim element emerged in close collaboration with the client, who conceived of incorporating themes referencing the Bauhaus into the scrim. Each directional face of the building centered on a city in which the Bauhaus existed – Weimar, Dessau, and Berlin – a nod to the history it compliments. 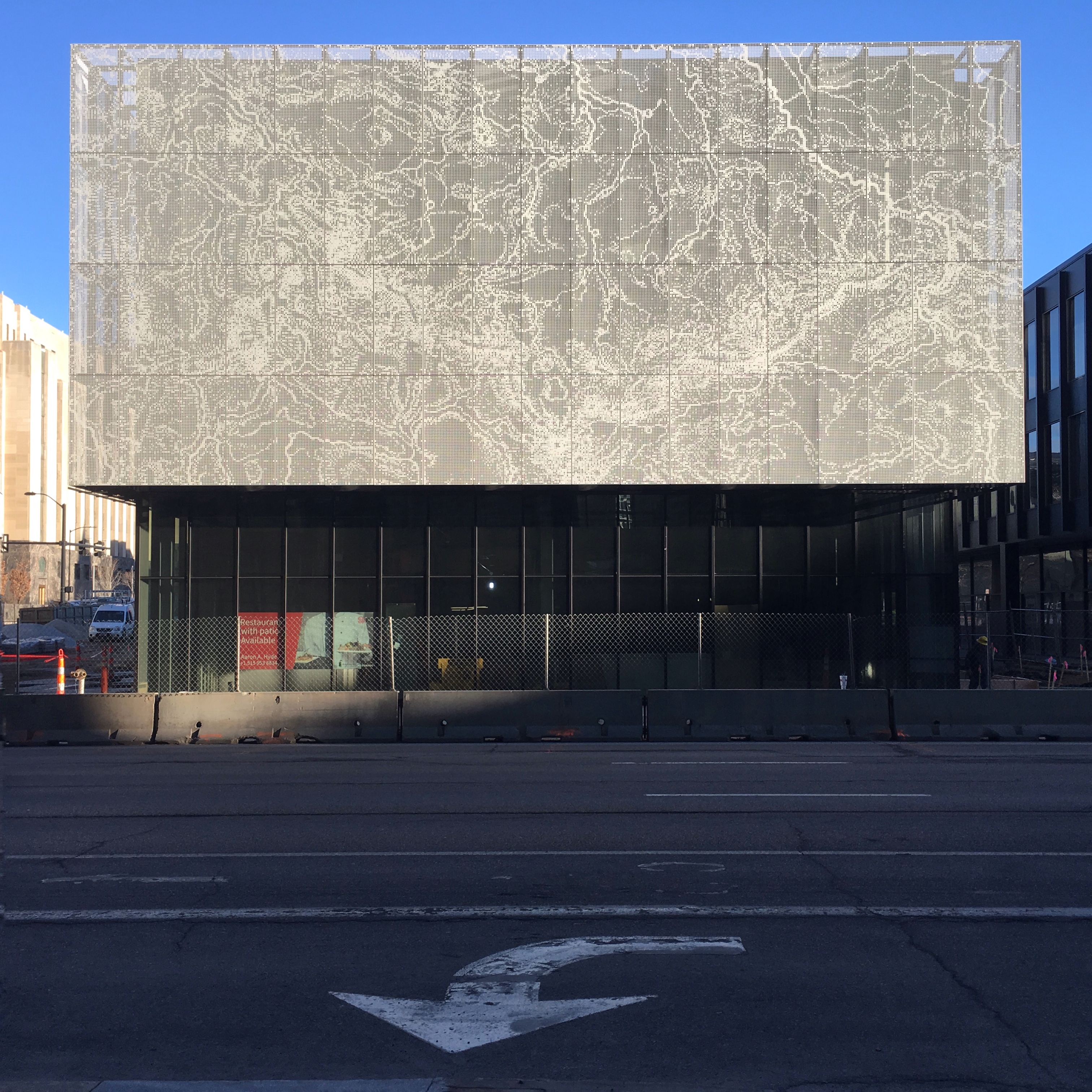 The perforated design of the scrim panels was only possible through close collaboration between the architect and the metal fabricator. The map imagery was edited, scaled, and positioned by the architect, and using specialized software, the fabricator converted the imagery to a pattern of perforated holes. Various iterations were tested to explore levels of opacity by varying hole size and proximity. These iterations were evaluated through a process of in-house prototyping by the architect and aluminum mock-ups by the fabricator. The result balances maximum transparency with pattern readability.

Biophilia, an inherent human connection to natural forms and processes, has been proven to provide measurable psychological benefits to people. Mies van der Rohe Architects often used trees, such as the Honey Locust, adjacent their buildings. These trees are also present at the adjacent Diocese building and within the Miesblock. The pleasurable effect of dappled light results from sunlight filtering through the leaves of trees. By incorporating organic patterning on the scrim, light will be filtered in a way similar to a treetop canopy, which both protects the interior from unwanted solar heat gain and offers a beautiful and varying veiled quality of light at the interior.

Through its massing, transparency, scale, module, and imagery, the design of Miesblock is informed by its historical context while also representing the zeitgeist of 2019. The building will spark curiosity, inviting the observer to engage with the city’s architecture.