Converging crises of climate destabilization, environmental deterioration, rising inequity, and economic turmoil call for extraordinary responses by organizations and institutions at all levels. For their parts, Oberlin College, Oberlin City School District and the City of Oberlin have launched a series of projects that join the many strands of sustainability including urban revitalization, green development, advanced energy technology, sustainable agriculture and forestry, green jobs and education into an integrated response.

By partnering and combining efforts, these three organizations are leveraging their collective expertise in response to the environmental and economic problems that confront northeast Ohio. These projects serve as a model for others around the world who wish to pursue a more sustainable, integrated model for the design of a post-carbon economy.

The Oberlin Project, launched in 2009, is a joint initiative between Oberlin College and the City of Oberlin that includes five very practical objectives as a part of a unified system:

Led by David Orr with support from Oberlin College, the design team and a variety of local and state authorities, the Oberlin Project also seeks to develop an educational consortium that includes the Oberlin public schools, Oberlin College and a local vocational college, in order to develop a comprehensive approach to teach issues related to sustainability. These institutions understand that the planning work and design of the Green Arts District can serve as a teaching tool for students of all ages.

The second project, the Oberlin Green Arts District, is a 13 acre piece of land within the campus in the heart of Oberlin, Ohio. Oberlin College is widely known for its historic leadership in progressive causes. In 1835 Oberlin became America’s first college to adopt a policy to admit students regardless of race, and two years later became the first coeducational institution. In the twentieth century, it similarly led on a variety of human rights issues and emerged as one of America’s most distinctive and distinguished liberal arts colleges. In the late 1990s, Oberlin again showcased its leadership by constructing the first substantially green, entirely solar powered, zero-discharge building on a U.S. college campus (the Adam Joseph Lewis Center). In 2004, the Trustees adopted what is still the most comprehensive environmental policy in higher education. In 2006, the college became a charter signatory to the American College and University Presidents’ Climate Commitment. Oberlin now seeks to launch the most ambitious green development and education project yet proposed by any comparable institution of higher education. 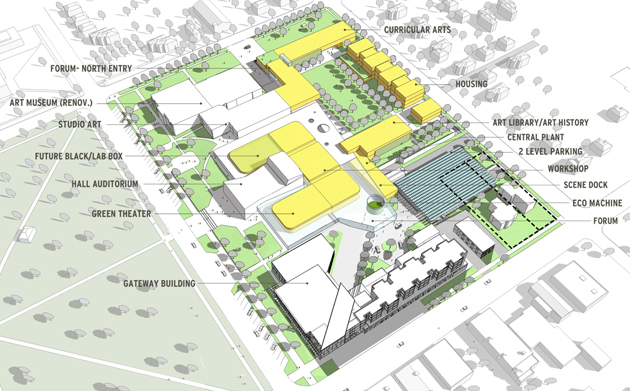 The Green Arts District will include new construction and renovated buildings, and include performance and teaching facilities for visual and performing arts. It also includes an art museum, student housing, conference facilities, retail and a new hotel. The planning efforts for the Green Arts District are building consensus among college, city and School District leaders, while designing an integrated system of architecture, engineering, energy, water and agricultural resources. The goal of the Oberlin Green Arts District is to position Oberlin College and the City of Oberlin as a national destination for art and culture, while setting new standards for sustainable urban development. This emphasis on environmental design will connect faculty, students and staff as well as College and Community to the natural world. This relationship will be incorporated into life and learning at Oberlin while providing the context for advancement in the arts and sciences. Plans for the Green Arts District include integrated systems of biomass for energy and heat production, water and nutrient recycling and an integrated agricultural component that is tied to both energy and water systems. The development intends to rely entirely on renewable energy sources, and require no municipal water. The investment in construction, renovation and energy technology is intended to stimulate the expansion of existing businesses and create new enterprises that meet emerging demands for energy services, solar technologies, green products and locally grown foods and forest products. 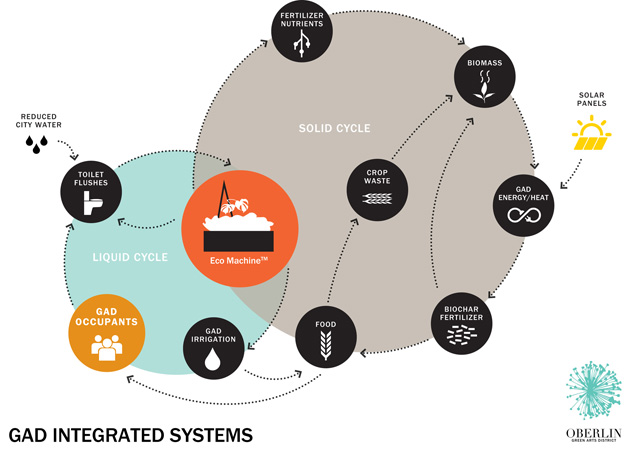 Food systems design is a key part of the project — equivalent to the focus on energy, heating/cooling, water, waste, transportation, well-being and economy. The project sets goals to establish relationships with local land owners to conserve land for agriculture and forestry in the five-county region around Oberlin in order to build a robust local foods economy to meet approximately 70% of food consumption. By expanding the market for locally grown foods and improving the local farm economy, the project hopes to create new employment opportunities in farming and food processing, while providing a base of locally grown organic fruits and vegetables.

Planning work and systems design for the Green Arts District followed a simple set of rules: emulate natural processes when possible, evaluate whether decisions are consistent with project goals, and understand long term value versus short term costs. At times the planning meetings grew to be quite large and decision-making was often a lengthy process, often gathering 30 people in a room to gain consensus. But by revisiting the rules, and because the project team had a common vision for the project, most of our challenges were resolved quickly.

The design team, working in conjunction with Oberlin College, developed a set of sustainability guidelines specifically tailored to the Green Arts District. Included are guidelines and metrics for ten distinct categories that include traditional topics such as energy and water, but also include subjects such as food, local economy, natural habitats and ecology and local economy. These guidelines are intended to help drive decision making for the Green Arts District and establish a common understanding for the district’s performance. 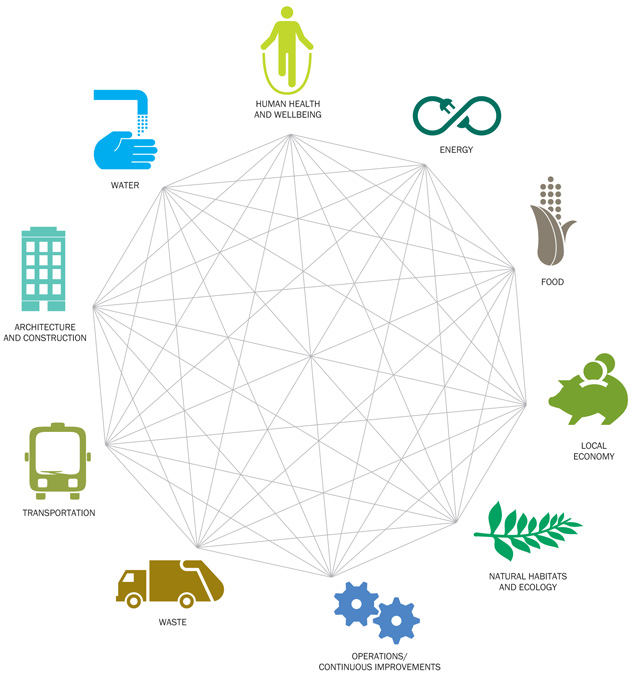 A third project includes planning for a new K-12 school for Oberlin City School District. Through renovating existing facilities and planning for new buildings to meet net-zero standards, the district’s facilities will serve as a teaching tool for the district, whose curriculum can be shared with other development in the Green Arts District. These efforts will elevate the only school district in the state of Ohio to offer an International Baccalaureate program for pre-K through 12th grade.

The Oberlin community—both the college and city—has been selected to join the Climate Positive Development Program, a joint initiative of the Clinton Climate Initiative and the U.S. Green Building Council. Launched in May 2009, the Climate Positive Development Program (CPDP) supports the development of large-scale urban projects demonstrating that cities can grow in ways that are climate positive—or able to reduce the amount of on-site CO2 emissions to below zero. This recognition places Oberlin alongside 17 other global development projects from Seoul, London, Sydney and other major metropolitan destinations. Selected for its commitment to leadership, the CPDP recognizes the capacity of the Green Arts District to implement economically viable innovations towards climate positive goals for buildings, energy, transportation, waste, water, materials and sequestration. Through the Climate Positive program the Green Arts District will be integrated into an elite global cooperative and will become the only project in the Clinton Climate Initiative that demonstrates retrofitting sustainable developments into existing city fabric.

The Oberlin Project, Green Arts District and K-12 School are currently in the planning phase. Representatives from Oberlin College, the City of Oberlin, and the Oberlin Public School District are working with architects, engineers, developers and other stakeholders to refine their plans and develop solutions that address climatic, social and economic issues facing the region.

While there are no shortage of hurdles to overcome in developing and funding these ambitious projects, stakeholders are remaining steadfast in their determination to see these projects come to fruition. By developing partnerships between all parties and establishing a common vision for the development of thriving, integrated and sustainable living, the Oberlin Project, Green Arts District and new K-12 school are poised as models for others who seek to develop projects for a post-carbon economy.

To learn more about the Oberlin Project, view the book about the project on our bookshelf.

David W. Orr is the Paul Sears Distinguished Professor of Environmental Studies and Politics and Special Assistant to the President of Oberlin College. The Oberlin Project was formed out of David Orr's vision of full-spectrum sustainability: an all-encompassing joint venture by the town and College to create a thriving, sustainable and environmentally friendly community in Oberlin.

Adam Cohen is an Associate Principal with BNIM where he is a Project Manager for the Oberlin Green Arts District, a project that will augment Oberlin’s world-class reputation with facilities that bring the arts and sciences together in a way that transforms human potential. Adam brings a fresh approach and creative solutions to this global model for high performance buildings and whole systems thinking, maximizing the ability to build synergistic relationships between infrastructure, ecology, economy and human productivity and prosperity.