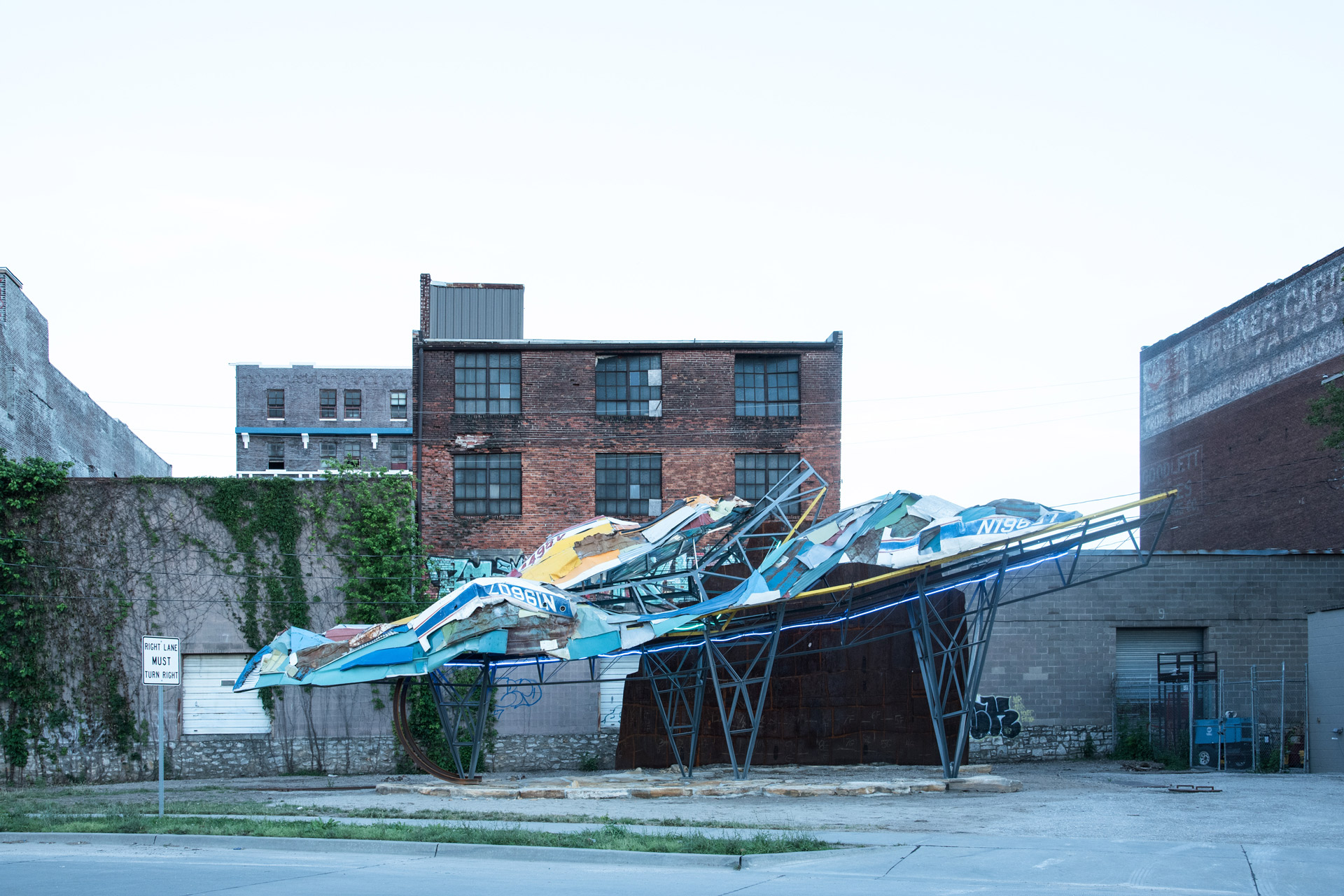 BNIM collaborated with artist Ben Wolf on Confluence, a sculptural installation in the West Bottoms of Kansas City.

Ben is a sculptor and metal fabricator based in Detroit. He uses abandoned materials to create spaces for people to congregate, sharing experiences evoked by the implied history of the reclaimed materials within their specific site context. 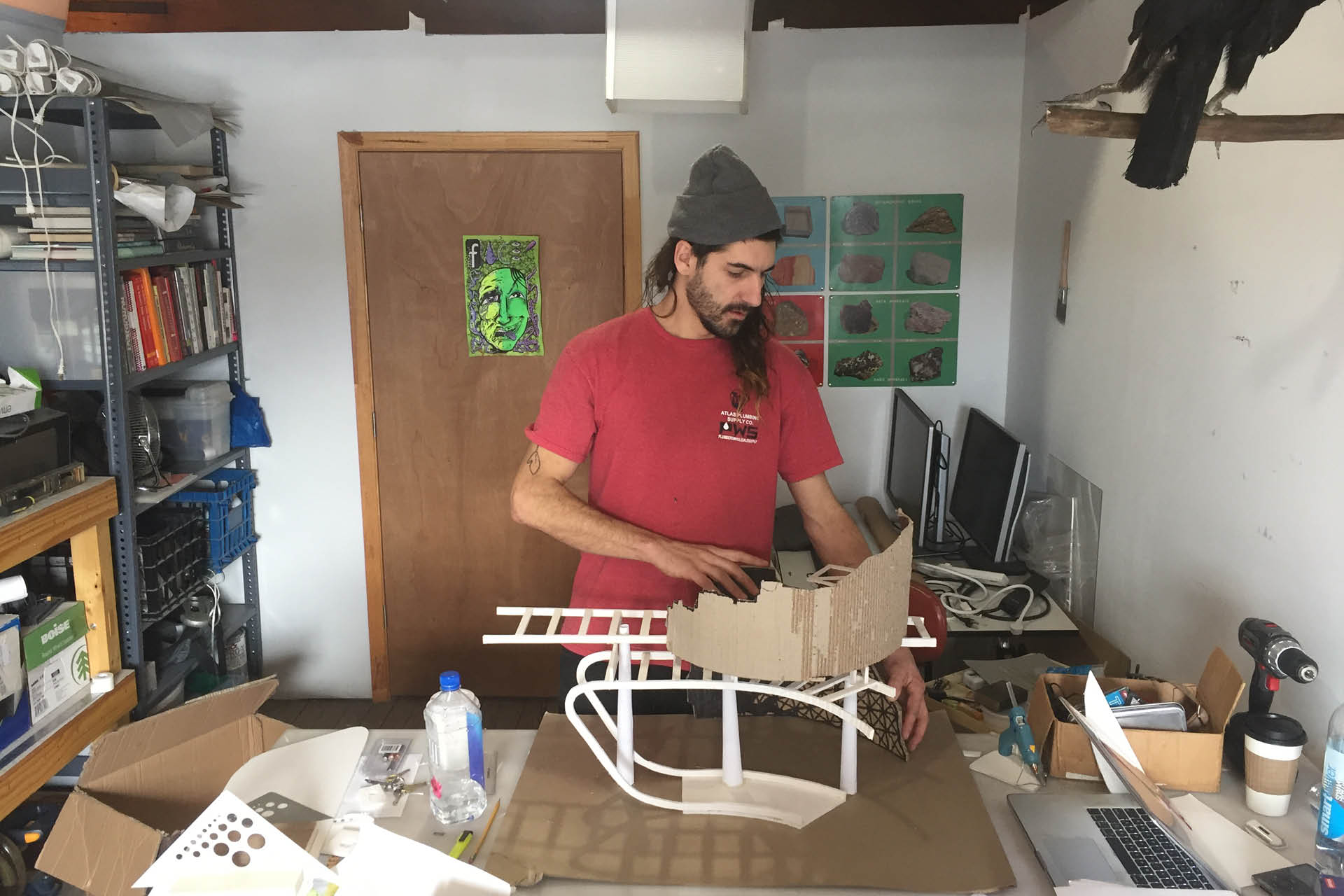 Artist Ben Wolf at his studio

We met him in late summer of 2016, when he came to Kansas City to scout the project with Courtney Hammond and Beth Malone, the co-founders of Dashboard. In their words:

Dashboard is an art agency that encourages risk-taking among creators and viewers. Projects and experiences are developed to highlight exceptional artists and inspire critical thinking through thoughtfully designed artistic collaborations and multi-sensory projects. We mediate a nationwide network of like-minded artists, builders, designers, and developers to produce a range of unique projects that engage a broad public.

Based in Atlanta, Dashboard came to Kansas City on a tip and inevitably met Adam Jones, who offered them one of his lots in the West Bottoms for the project. Adam and Dashboard invited BNIM to collaborate on the project, and the rest is (recent) history.

Ben’s initial concept for the Water Yard, as the site was to be called, involved a pile of shipping containers whose interior spaces (connected by a wending staircase) would host different programs, including performances, artifact exhibitions, a pop-up cafe, and a viewing platform atop one of the uppermost containers, from which a waterfall would cascade back to the ground.

Early in the process, the project funders directed Dashboard to propose a new concept for the site. The waterfall was to remain, given Kansas City’s reputation as the City of Fountains, but its armature was to become more dramatically gravity-defying, claim more area on the site, and most importantly lose the constrained boxiness of the repurposed shipping containers.

We complied by looking to the site for inspiration. Adam’s lot is a wedge-shaped yard, recently formed by the rerouting of 9th Street into the Forrester Viaduct. Its backdrop is the Hobbs Building, a seven-story warehouse built in the neighborhood’s 19th-century industrial heyday.

The West Bottoms was one of the earliest centers of development in Kansas City. The flat river bottom created by the converging Missouri and Kansas Rivers provided easy debarkation for riverboat traffic, leading to the establishment of Kansas City’s first train depot on Union Avenue. Eventually, an elevated cable car track along 9th Street connected Union Depot in the Bottoms up to Quality Hill. This elevated line continued on 9th Street past the Water Yard site to Kansas City, Kansas. 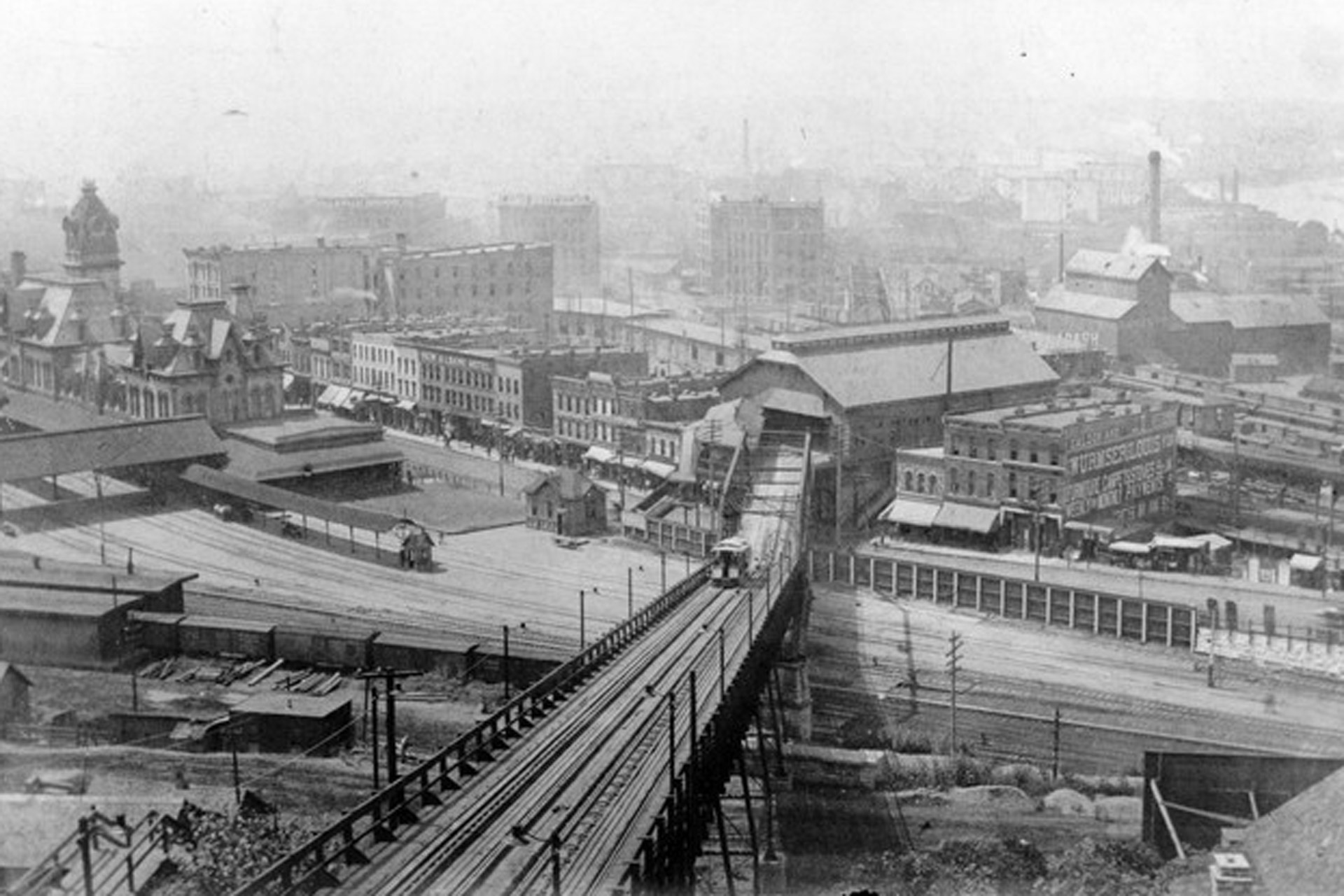 The intimacy with the rivers that irrigated the West Bottoms’ growth ultimately led to its depopulation: major floods in 1903 and 1951 pushed most of the non-industrial inhabitants to higher ground.

Kansas City is still a major intermodal freight hub; according to the Mid-America Regional Council, it’s the second largest rail hub and fifth largest trucking center in the US. The evidence is everywhere in the neighborhood: towers of emptied shipping containers stacked along the riverfront; miles of train cars snaking through the floodplain; the engine growl and tire thrum throughout the day and long into the night. 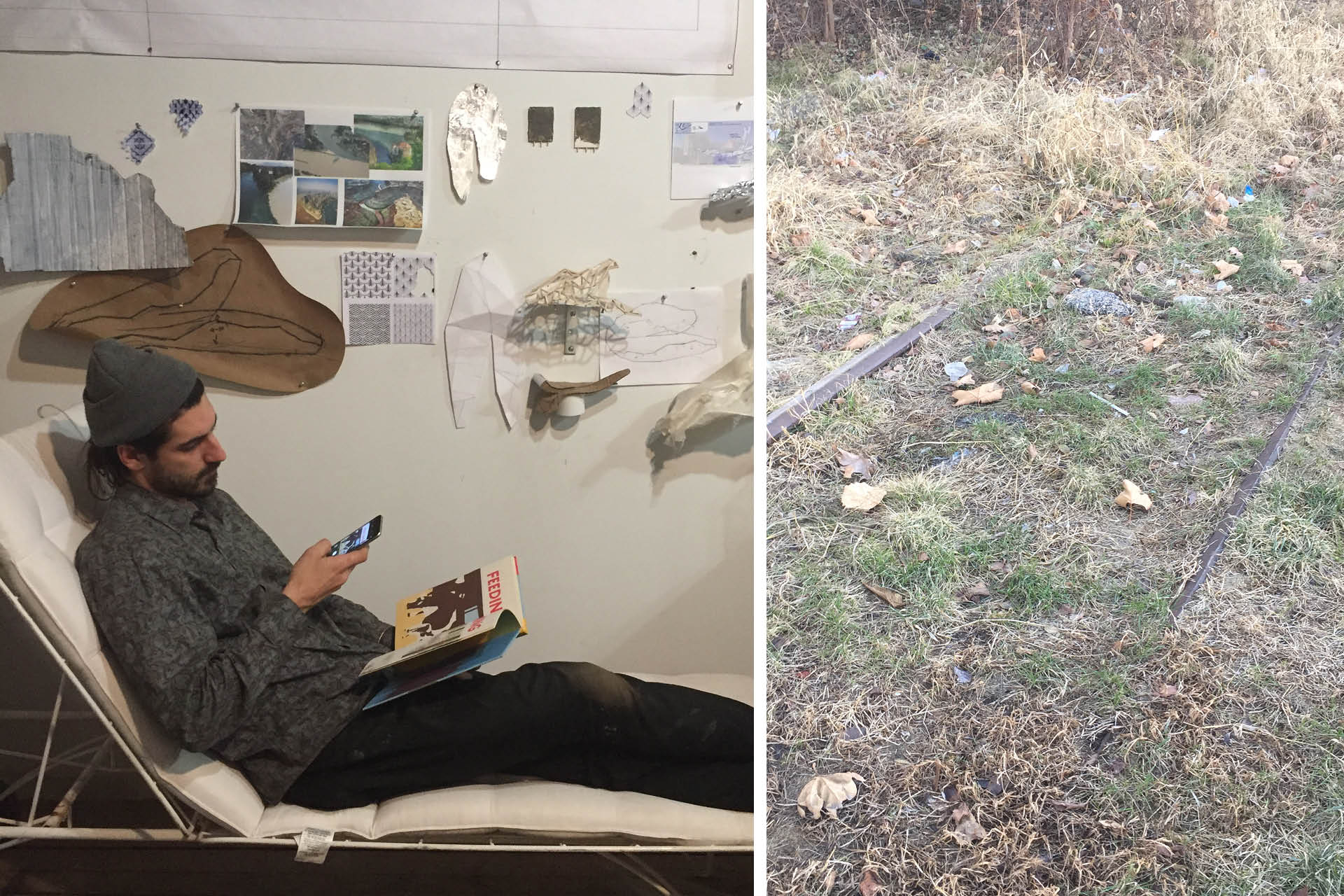 At the Water Yard, we uncovered vestiges of this railbound history: tracks bent out of use run along the southern edge of the site, connecting missing rail lines from Hickory Street on the east to Liberty on the west.

The story we heard was about the water, fluidly constructive and destructive; the rhythmic converging and diverging of paths becoming ley lines; a cloister with the whole continent flowing through it. 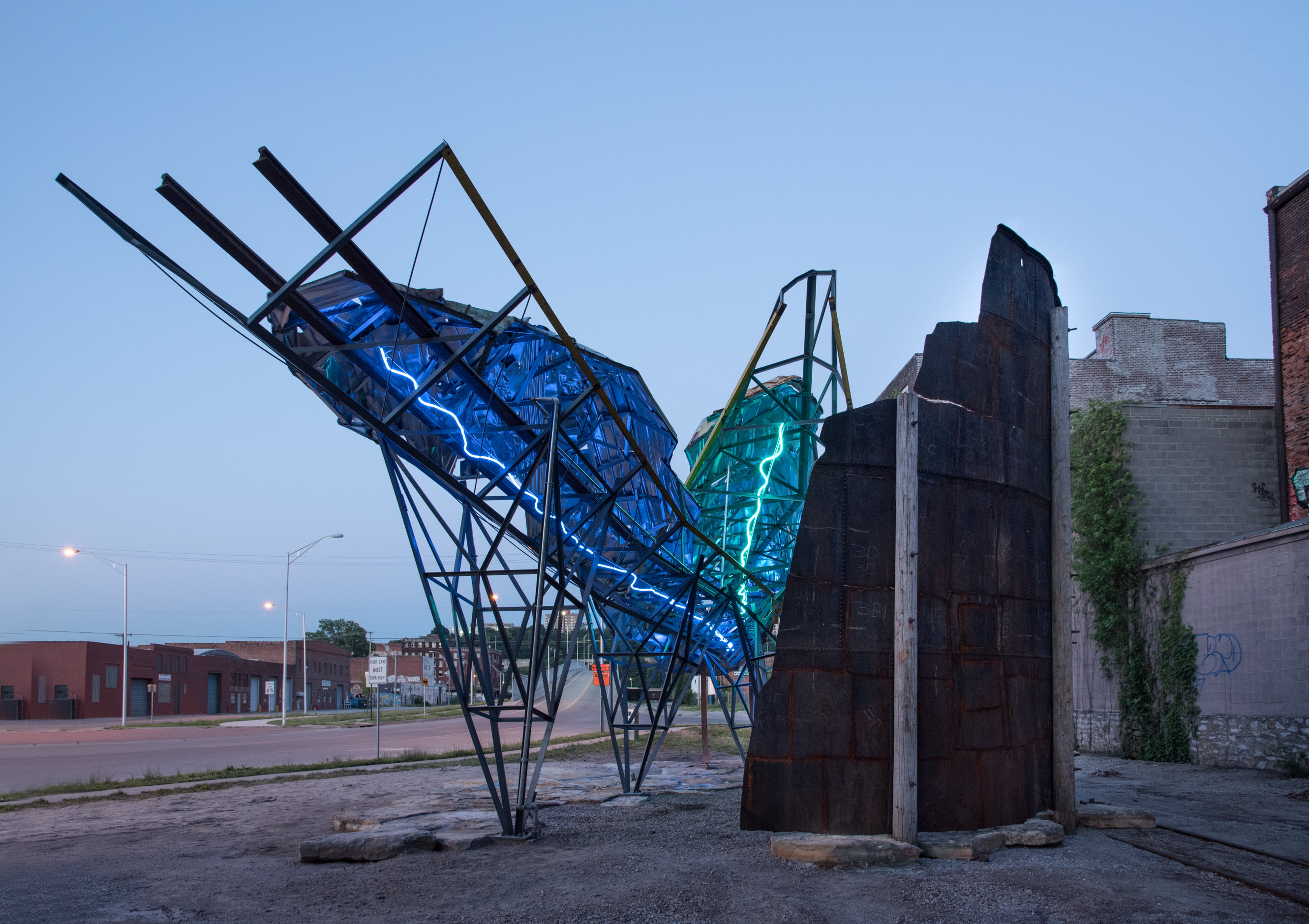 view of Confluence from the west

The project as it stands is called Confluence. It is a quadrupedal structure in two pieces. Running along the north of the site, parallel to 9th Street, is the low, long wing we named Missouri. It claims the horizontal space of the site, shaped by the memory of the elevated track. Sitting atop it, leaning southwest and reaching skyward (Ad Astra etc.), is the piece we named Kansas. It owns the vertical space of the site, rising up into view as a driver crests the Viaduct, competing against the broad face of the Hobbs Building. 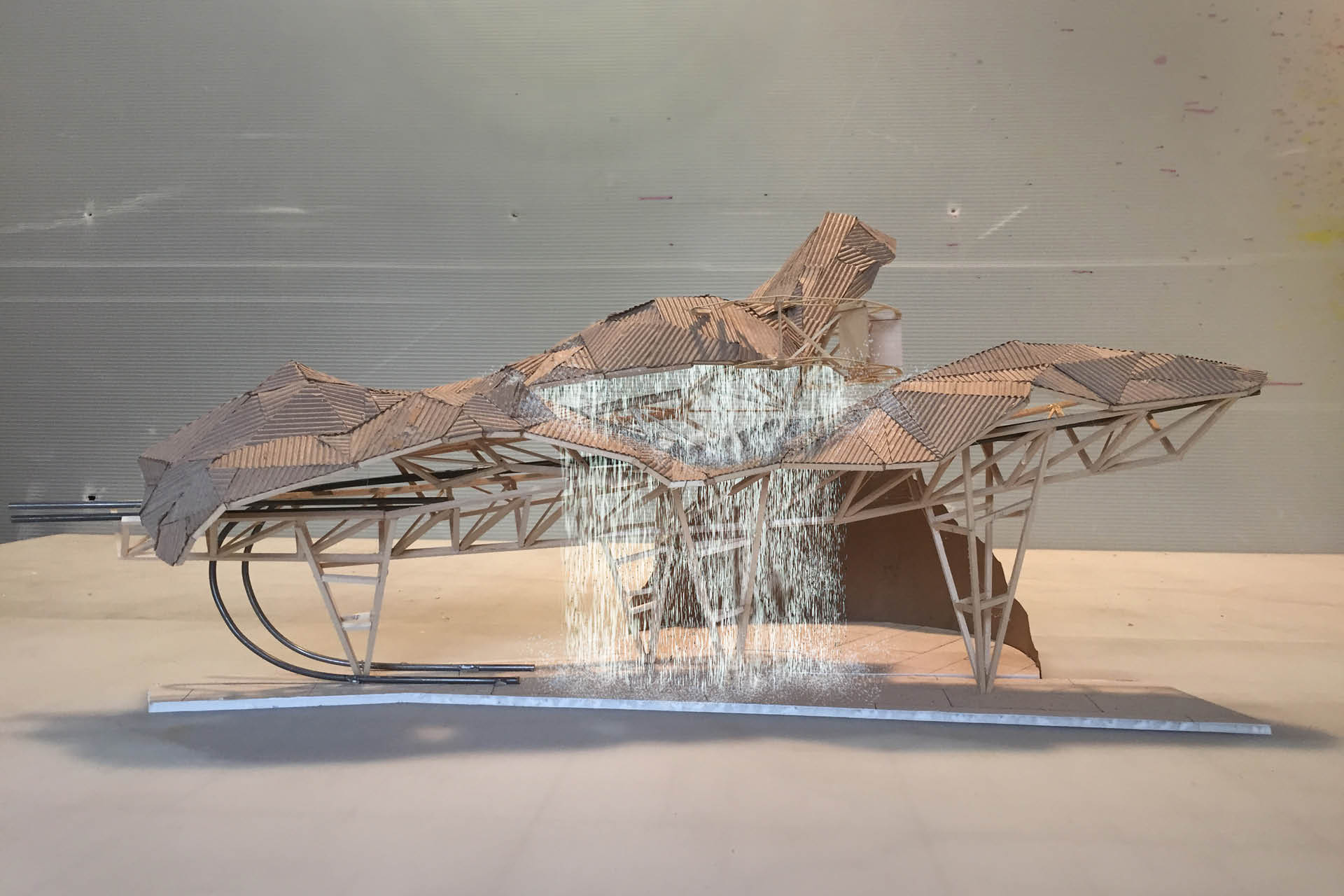 Where the two wings meet, a 14-foot arc of water cascades down the face of the structure into a basin hidden beneath a plinth of Kansas limestone. The circumference of space implied by the water is completed by a 20-foot-tall tower of oxidized steel. This is half of the original water tank from the Hobbs Building, removed in pieces and reassembled here. Stand within the circle of the tank while the fountain runs: the neighborhood recedes within the sound of the water. 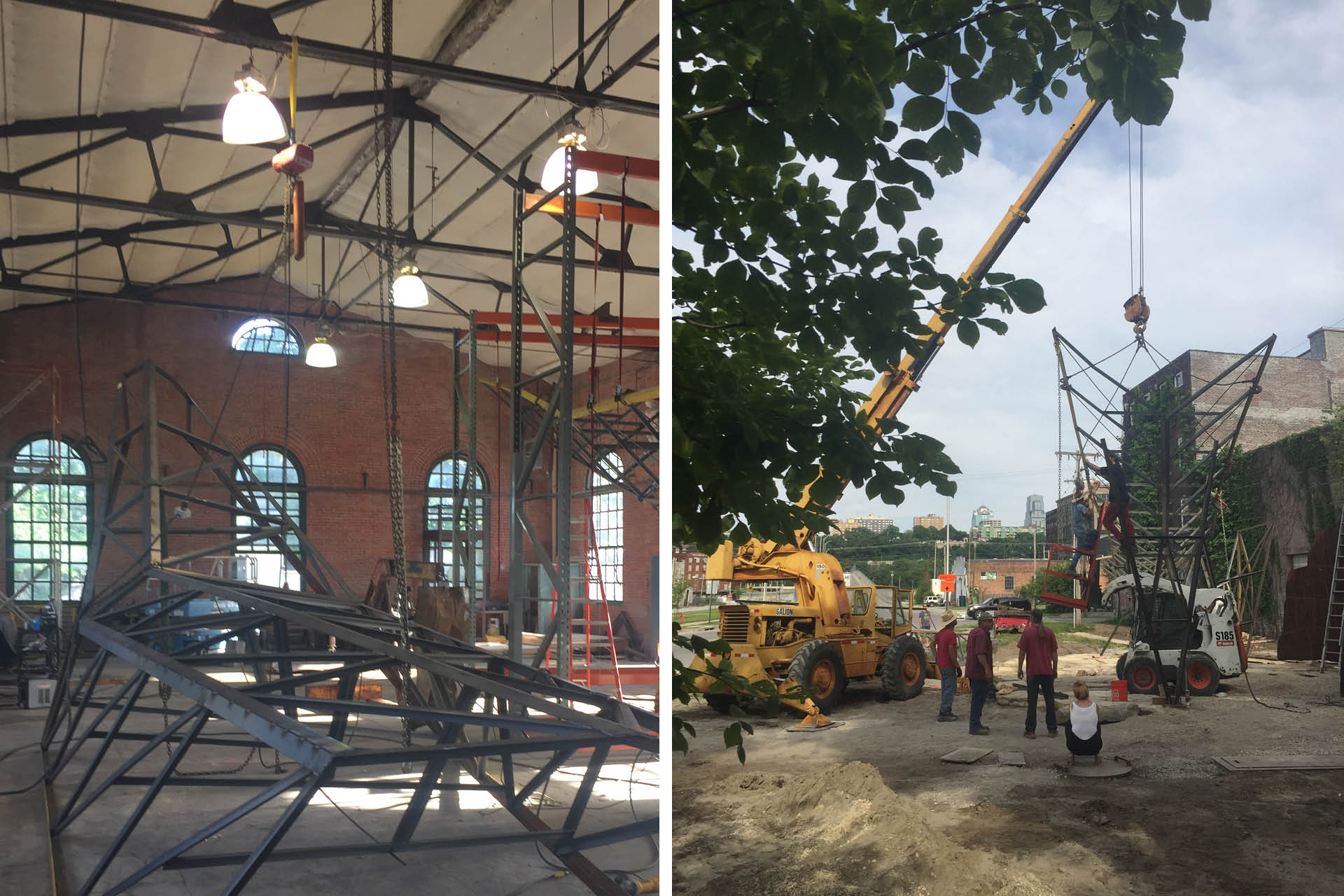 Armature at shop and then being erected on site

BNIM worked with Ben to conceive of the steel armature as a shelf upon which he could improvise a composition of decommissioned auto bodies, airplane hulls, container sheathing, and storage drums, raised 15 feet into the air. The armature is conceptually a set of simple trusses that in reality was an exacting assembly of precise lengths and angles that Ben and his team of welders realized in the course of a month of fabrication. Comparatively, the free-composition of reclaimed metal cladding came together in little more than a week. 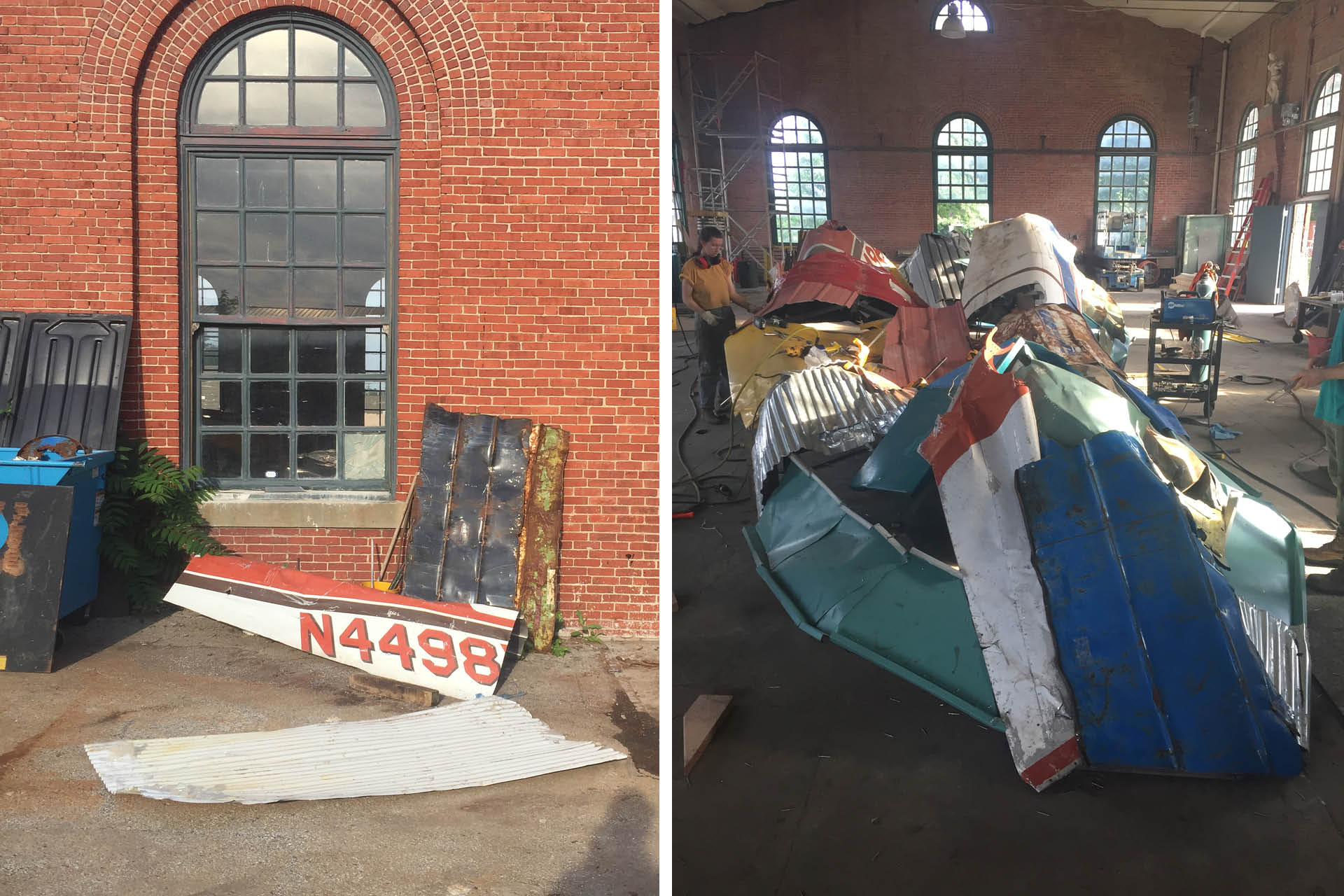 Reclaimed airplane parts and metal cladding at the shop

Woven through the structure are century-old rails donated by Kansas City Southern. At the eastern tip of the structure, rather than bend up toward the Quality Hill bluff, the rails curves down into the limestone slabs, emerging back to the earth. 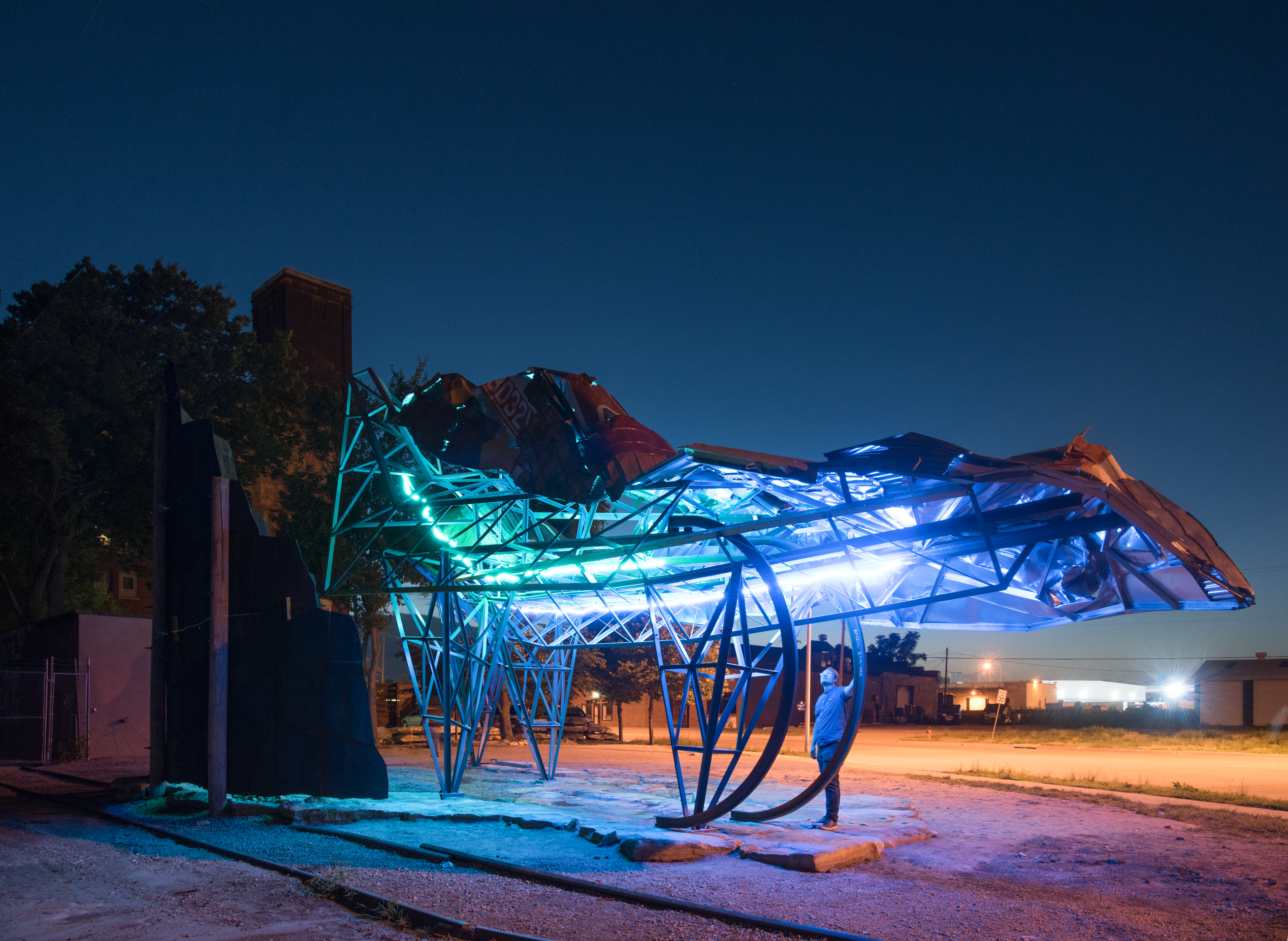 Waters Edge Aquatic Design consulted on the fountain system. The intent is for the system to run entirely on filtered rainwater collected from the roof of the Hobbs Building.

The structure is illuminated at night by converging lines of blue and green neon, river colors chosen to balance against the neighborhood’s warm halogen glow. A more conceptually rigorous installation was planned by Los Angeles-based artist Nikita Gale, but lost in the project’s redesign. Nikita ultimately collaborated with Ben on the color sequence of the reclaimed metal cladding. 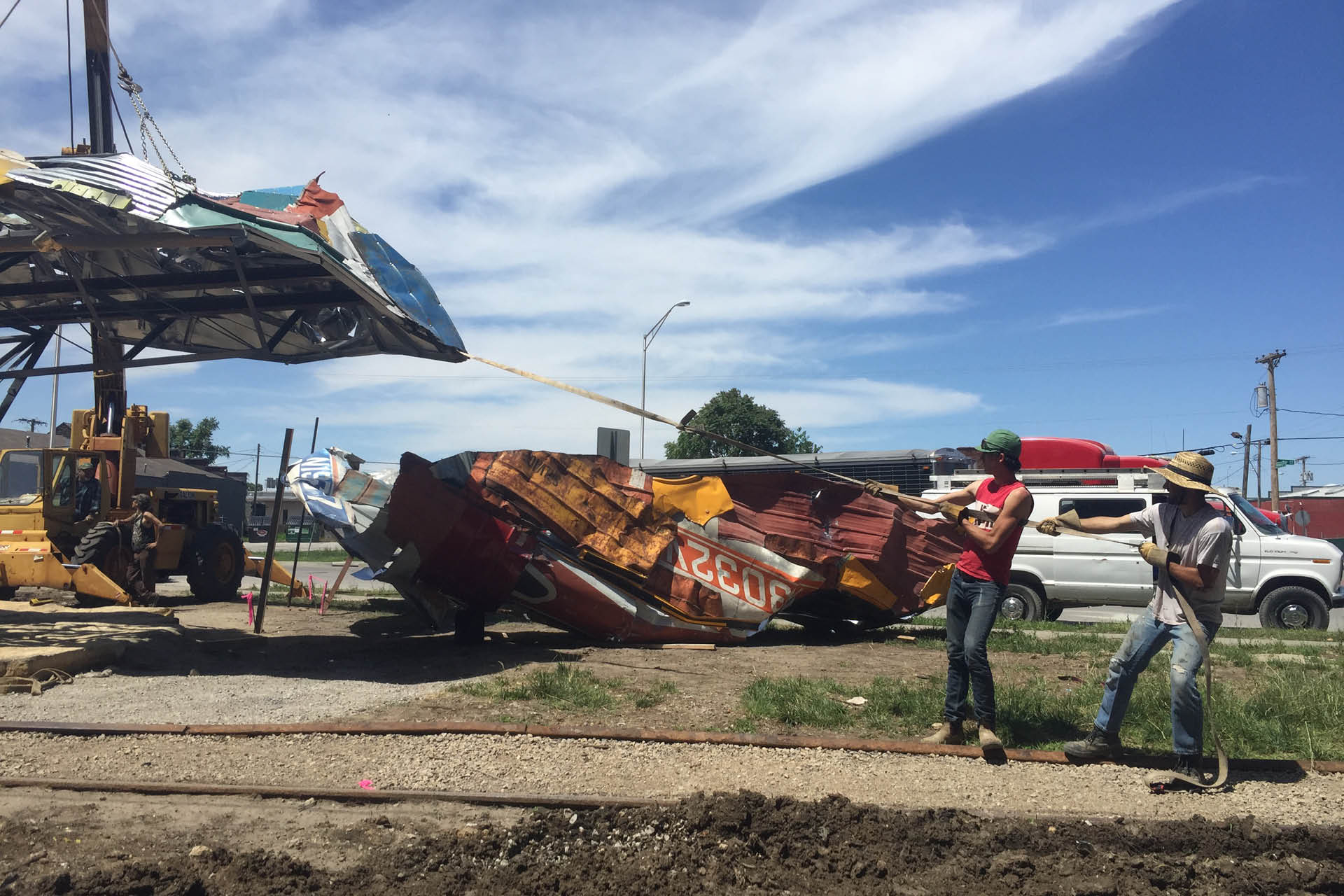 Dashboard will maintain the Water Yard for a time, and it will eventually transfer to Adam Jones’ stewardship. BNIM’s landscape studio has identified a seed mix of native perennials to be planted across the site. The existing historic rails have been excavated up to the property line. BNIM is working with a developer to restore a series of buildings just across Liberty Street from this rail right-of-way. The dream is for the continuation of these rails to be unearthed and reclaimed as a pedestrian path connecting this new development to the Water Yard. 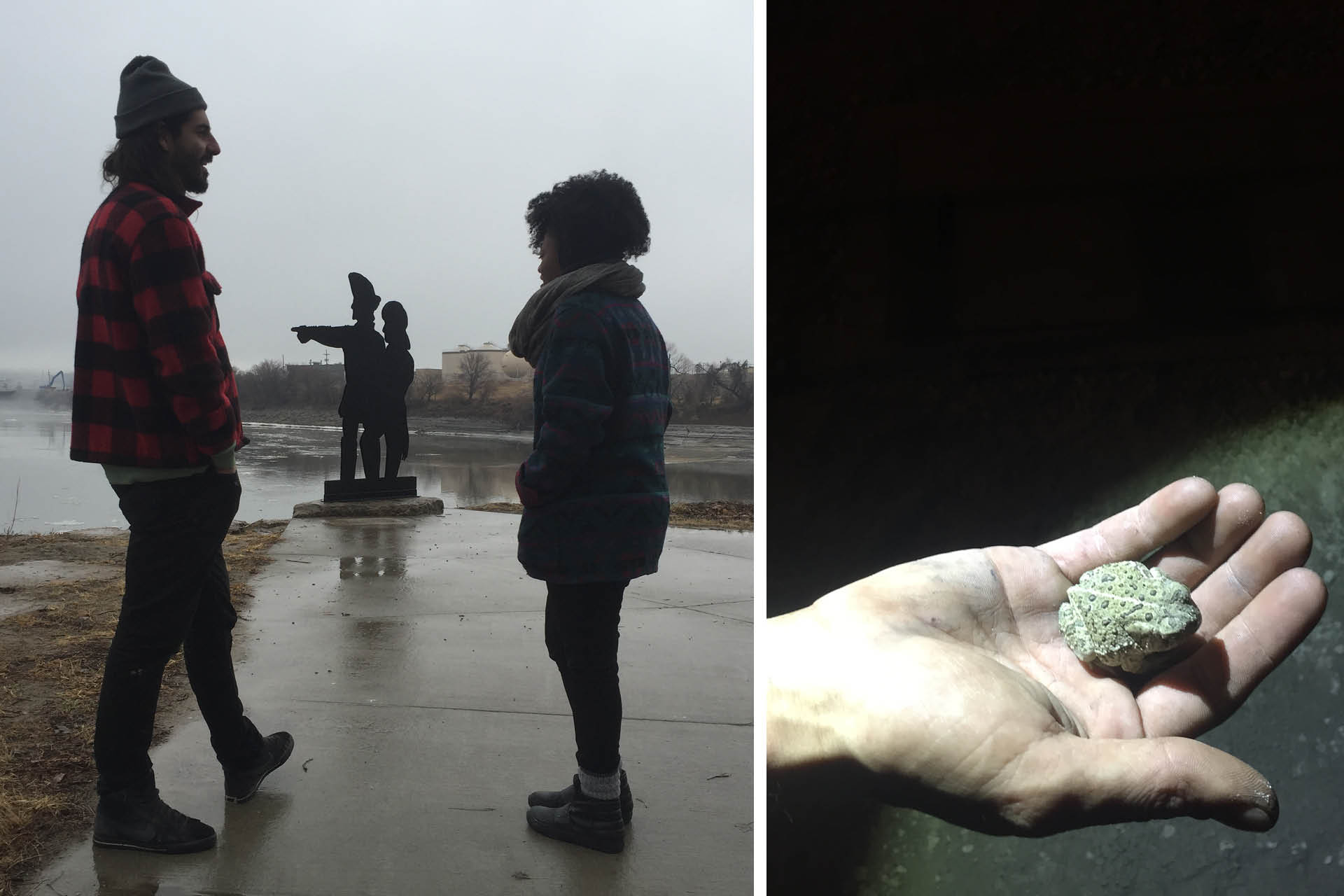 Ben and Nikita at the confluence | Life onsite

In the meantime, the introduction of water at the site is already diversifying its ecosystem. A family of toads has moved into the joints in the stone plinth. They aren’t the only animals we see in the limestone; each slab is speckled with brachiopods, fossilized millions of years ago when water covered the prairie.