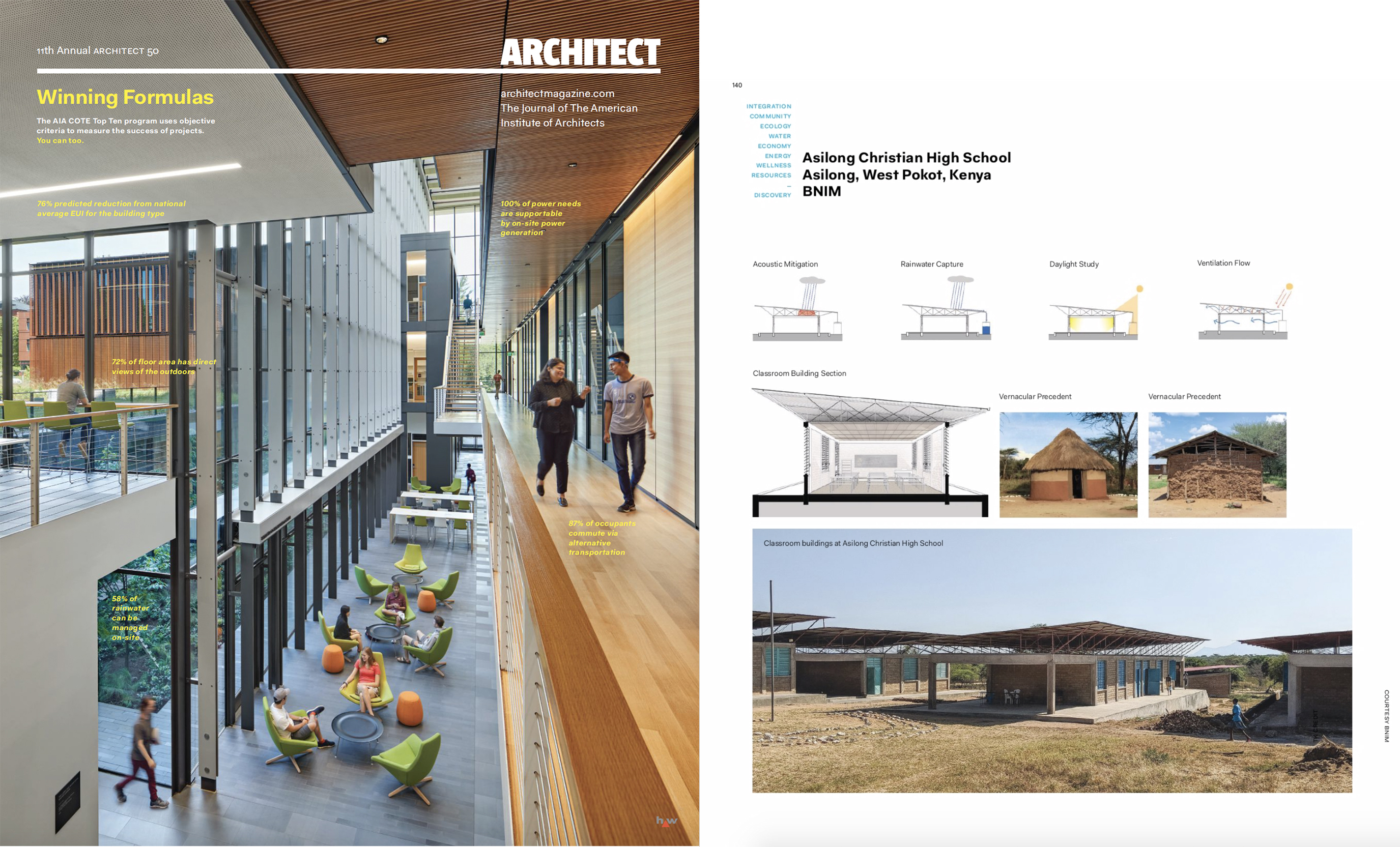 Listening to locals and training them to work as craftspeople during construction ensures that this net-zero school campus will enact lasting change, not just on individual students, but on the region as a whole.

There’s a bit of irony to be found in the metrics for the Asilong Christian High School: “Walk Score is not supported in this community,” reports Kansas City, Mo.–based BNIM, which designed the campus of single-story structures on a greenﬁeld site in Asilong, Kenya. The irony lies in the fact that walking is the primary means of transportation in the area where the project is located, more than 230 miles northwest of the nation’s capital, Nairobi. For the past decade, BNIM principal Laura Lesniewski, AIA, and associate principal Samuel De Jong, AIA, have been making yearly trips to the region, where sustainability is a given: “There’s no municipal infrastructure whatsoever,” Lesniewski says, “so net zero is what it is.” A lack of available utilities didn’t aﬀect the goals for the project; instead, it inspired the team to set a high bar in bringing change to the community. “[Nearby] towns like Kapenguria and Kitale are on the grid,” De Jong says, noting that the team wanted to ensure that all the Asilong Christian High School students—there will eventually be 320 of them—had facilities that would oﬀer “the same education that students are getting in larger towns.”

To start with, that meant generating energy via a 2-kilowatt solar array that powers electronic teaching aids such as laptops, tablets, and e-readers, as well as lighting for evening hours. The next hurdle was water: “We did some early climate data research,” Lesniewski says, but “we learned more from talking with the local people than from any available online data.” What they found is that access to clean water in the area is diminishing: The eastern edge of the campus is a now-dry river bed; upstream development and changing climate patterns, including extreme heat and drought, have rendered water management a critical problem. BNIM’s design includes an on-site well with a solar-powered pump, which provides all necessary potable water. On-site gardens provide vegetables for meals prepared at the school, and native plantings mitigate erosion.

For the structures, the quality of local materials and construction techniques was a concern, Lesniewski says, but “we didn’t want to divorce ourselves from that. We tried to improve the quality of the [local] bricks because it is a very natural material to use.” Both bricks and concrete for the new structures were prepared on-site. “We’re building oﬀ familiar techniques, but reﬁning them to make them safer, give the buildings more longevity, and make them respond better to the climate,” De Jong says.

It’s common for civic buildings in the region to utilize wattle-and-daub construction with a metal roof, which informed the design of the new buildings: BNIM’s 24-foot-wide structures are spanned by lightweight metal trusses that support shallowly sloped shed roofs. Walls consist of a concrete frame on 7-foot centers, which are ﬁlled by brick or wicker screens. The brick inﬁll was formed using a conﬁned masonry technique: The bricks were laid ﬁrst, and the concrete poured around them to provide a more solid, integrated structure.

Raising the roof plane created a separation between classroom ceilings and the corrugated metal spans that allow ample cross-ventilation. Many local structures with metal roofs can’t be used when it rains, as the sound of water hitting the roof renders the spaces acoustically inviable. Here, locally sourced woven papyrus on the ceilings mitigates the noise. Steel components—the rebar, lightweight trusses, and metal rooﬁng—came from Kitale, about three hours away. “They bring it in pieces and it’s welded on-site to reduce transportation costs and as an opportunity to train people in welding,” De Jong says.

The school’s inﬂuence is meant to be far wider than just its local community in the northwest corner of Kenya. “This [can be] a model for stronger, more durable, and robust structures that could be used around the country,” Lesniewski says. —E.K.